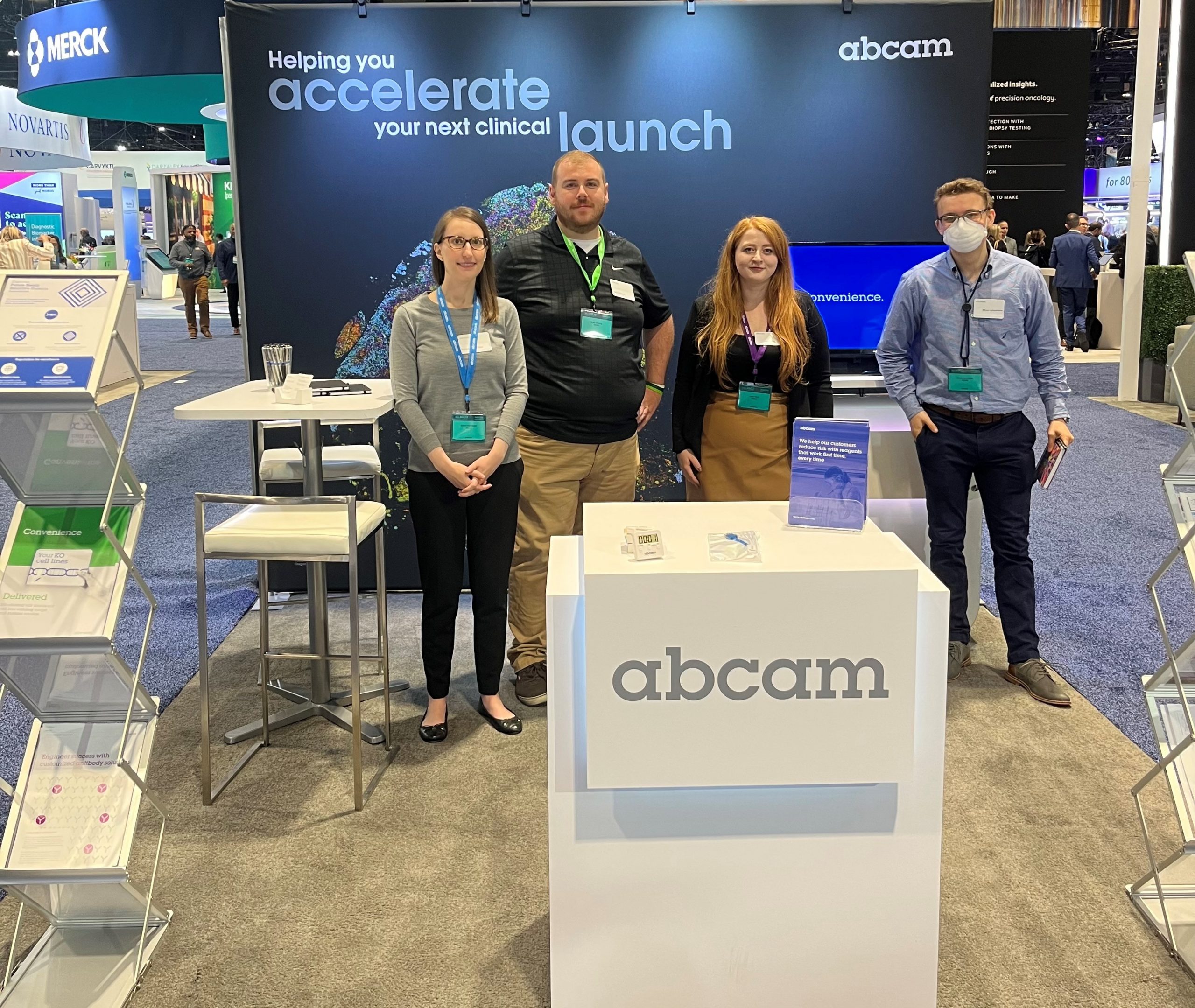 You might have noticed our booth adorned with an eye-catching image of CycIF labeling of FFPE TNBC tissue sections stained with Abcam antibodies to immuno-oncology and immune cell markers (image taken by Dr Koei Chin).

To recall ASCO’s unique atmosphere and the insights from world-renowned experts, we’ve interviewed Subham Basu, Senior Director of Strategy for Immuno-oncology and Oncology at Abcam, about his ASCO experience. We’ve discussed networking, the most memorable talks, the biggest challenges for oncology clinicians and researchers and what to watch out for in the biomarker space.

After two virtual editions, how does it feel to be able to finally attend ASCO in person?

“It was fantastic. I’ve been to several ASCO meetings pre-COVID in my pharma roles, and I could immediately feel the buzz from even being on the plane and knowing there were scientists, clinicians, and people from the life sciences and pharma businesses. As soon as I entered the conference center, I could see people looking out to see who they knew. Walking down the big corridors or into a meeting room and seeing people you have known for years was a great experience.”

Nothing can beat being able to speak to somebody right after a talk or at a poster session.

“That is so much better than anything you can do on Zoom or Microsoft Teams call. I think the palpable buzz of energy and excitement and being able to follow through with any conversation was fantastic.”

The big theme of the ASCO 2022 is Advancing Equitable Cancer Care Through Innovation. What are the biggest challenges for clinicians and translational researchers in this area?

“For someone like me, who’s been going to ASCO for a while, it was very refreshing to see people (at clinical scientific talks) being open about mentioning that most subjects in clinical trials are white Americans. Cancer affects everybody: women, children, people of any and all genders, and people of any and all races. I think the only way we can ensure we’re making medicines that capture and address everybody’s needs is to have everybody at the clinical trials. It’s not a political correctness thing or a ‘woke’ thing. It’s a scientific thing. Whether we’re developing a medicine to treat breast or prostate cancer, we must ensure it addresses the needs of all affected people.”

“Instead of giving a drug to 100 patients when only 30 will benefit, you can provide the drug to 30 patients, and 28 will benefit. If you get the right biomarker, you can price the drug differently and make a different value proposition for reimbursement.”

What ASCO sessions did you find the most insightful?

“So, the plenary sessions were great. There were great breakthroughs for colorectal cancer, showing improvement with panitumumab, an inhibitor of EGFR, and chemo, versus bevacizumab, an inhibitor of VEGF, and chemo in the Paradigm trial, and in metastatic breast cancer, where trastuzumab deruxtecan, an HER-targeting mAb-ADC, showed meaningful benefit in the DESTINY-Breast04 trial.

As a person who heads up the Immuno-oncology and Oncology research areas and as a former scientist, a former academic PI, I find it amazing that some of the things scientists worked on 5-10-20 years ago are now in the clinic. It’s now possible to inhibit KRAS, who has been considered the undruggable, the king of undruggable!”

Watch a short video below with Bristi Basu, who spoke about targeting KRAS.

“I also saw a great poster from Boehringer Ingelheim where they were revisiting MDM2 and p53. p53 was the king of cancer from a research point of view, but there was not much success in the clinic. Now, studies are addressing it.

Another interesting study, presented by Sanjay Goel from the Robert Wood Johnson Medical Center, looked at a small molecule inhibitor of SUMOylation. A few years ago, nobody would have thought that you could have inhibitors to something like SUMOylation, and they also did that in combination with pembrolizumab, the PD-1 inhibitor.

So then, combination therapy is very important, whether it’s two different types of molecularly targeted therapies, an immuno-oncology therapy with molecular targeted therapy, or two immuno-oncology therapies, like TIM-3 with PD-1. It’s exciting to see where the combination therapies go. There have been many interesting combination studies. For example, Elena Garralda from the Vall d’Hebron Institute of Oncology in Barcelona spoke about the AURELIO-03 study, which examined the combination of superagonists to IL-2/ IL-15 with pembrolizumab.

Cytokines have always been considered a very interesting target to use in therapy. But because there’s always a lot of toxicity, people are looking at different ways to make synthetic cytokines.”

I’ve noticed that many researchers and companies are hungry for biomarkers because they’re going after targets for which there might not be great commercial tools. I think that’s a place where we could help and ensure we get there early.

What do we need to watch for in biomarker space, and what are the trends you’re most excited about?

I think getting IHC antibodies to not just the usual suspects and looking at cell signaling. We need to look at phospho-specific antibodies and different targets.

“And, of course, we don’t just play in the tissue antibody space. We also are looking at liquid biopsy. And the majority of people, if they think of liquid biopsy, they think of ctDNA. There are great studies out there with ctDNA, let’s say, in lung cancer. There are great companies out there, like Guardant Health, already making excellent assays with ctDNA as a biomarker. But we mustn’t forget proteins. There are lots of proteins in the biomarker space, and we already sell to many companies in this space, but we want to do more.

In the end, IHC gives you the spatial. But liquid biopsy allows us to avoid taking a piece of breast tissue or making an incision into lung or pancreas, which is very difficult to do. We want to be able to look at blood, urine, or lymph and be able to find something in a non-invasive way.”

Could you summarize your key takeaways from this year’s meeting? What was the most memorable?

“The most memorable thing for me is that we’re looking at all the ways we could interrogate different signaling pathways, whether that’s DNA damage response, KRAS, PI3 kinase/AKT signaling, or the MAPK pathway, and often in combination with immunotherapy. And we’re looking at things we didn’t think you could make drugs towards.”

How do you see Abcam’s role in the clinical oncology space?

“We want Abcam to be part of these researchers’ drug development pathways from an early stage. Our Oncology and Immuno-Oncology research area teams work to ensure we develop reagents – antibodies, cell lines and proteins – to targets what researchers will use in a year. We want to be ahead of the curve.”

In what ways can Abcam help oncology clinicians and translational researchers?

“I think it’s biomarkers. So, biomarkers are a vast topic. You could have biomarkers with a very early stage discovery all the way to a companion diagnostic.”

But whatever phase of discovery and drug development you’re at, we will ensure that you get the best antibody clones from a performance point of view but also a commercial point of view.

“For example, an antibody might work in IHC but end up being polyclonal, or it might work in IHC but not in every condition. Our catalog is vast, and we have great antibodies, for which we have developed a lot of evidence. We’ve been creating enhanced IHC validation data packs that will significantly help from a performance point of view.

But also, from a commercial point of view, we will know with which clones people will have the most diagnostics rights for them. Abcam can help with this aspect.”

What advice would you give to someone attending ASCO for the first time?

“It’s so easy to get overwhelmed. Although nobody likes to do homework, you need to review the sessions beforehand and check which poster sessions and talks you want to see. What companies do you want to speak to, from companies presenting clinical research to booths you might want to see?”

Could you share any networking tips for attending such global conferences as ASCO?

“To follow up on what I just mentioned, send the emails and LinkedIn messages early. If there are people you already know, make sure they will be there. Everybody who is going to ASCO has a packed schedule, so ensure that you send messages early.

And if you meet somebody there, I think it’s always good to take a step back and see what this person is interested in.”