[A note from the editor: Logan is the terrifying winner of our Halloween writing competition. When not writing horror, he’s a lab manager at Magee-Womens Research Institute in Pittsburgh looking at DNA repair genes in C. elegans. The competition was fierce and Logan had to fend off ghoulish poetry, an army of lab frogs, space zombies, and subatomic chitchat, but in the end, he prevailed! Congratulations to Logan and we hope you have your pants literally scared off! If you’d like to read more of Logan’s work, you can find it on his facebook page ]

Nexus fine tunes transcription across the entire genome, Conserved Nexus crystal structure reveals functional domains, and Mutations in Nexus gene implicated in colorectal cancer were the titles of three heavily highlighted papers sitting on the desk of eager postdoc Zahn Kipnur. Since its discovery only one year ago, the protein Nexus had been found to be a master regulator of nearly every cellular function. News outlets were even calling it “The God Gene”.

Zahn was now hard at work to jump on the Nexus bandwagon and earn himself a high-impact publication. At the onset of his project he’d completed an siRNA screen for genes that affect any of Nexus’s numerous posttranslational modifications. To his delight he picked up a gene that appeared to be when knocked down caused Nexus to have six new methyl groups added to its surface. He named the new gene dmn1 (DeMethylates Nexus.) This could be his ticket to success, the gene that controls the God Gene.

With the threat of being scooped all too real, Zahn was working out of his mind, completing dozens of experiments each week to attempt to characterize the function of the new gene. Today was the guaranteed delivery date of the anti-Dmn1 antibody he’d ordered from his university’s antibody production team and he already had a blot waiting for it.

“Yes, is that for me?” Zahn replied, barely looking up from his PCR tubes.

“Yep, it’s your antibody. Sorry to cut it so close to the deadline. The rabbit responded very strangely to the antigen! He got all riled up, kept biting the tech. It was a whole—”

Zahn cut him off. “I don’t care, man. You got it here in time and I thank you. Now, please,” he continued to methodically pipette his samples.

He capped his tubes and commanded the thermocycler to amplify dmn1. Without skipping a beat he diluted the new antibody and began probing his blot for dmn1.

Finally, he added IPTG to his cell cultures to induce his brand-new dmn1 overexpression reporter. After twelve hours in the lab he finally had a good stopping point to go home for a nap, but only to return at night once his data was ready to reveal itself.

Zahn flipped on the light, took one last deep breath, and picked up where he left off earlier in the day. He began by loading his PCR reactions into a gel, then turned to the western in progress; the cell cultures wouldn’t be ready to harvest for a few more hours. He prepared his secondary antibodies and reached to pick up his blot from the shaker.

“Ah!” he instantly recoiled in pain. The box containing his western blot was red hot and he could already feel a blister forming on his finger. He carefully touched the surface of the machine that it was sitting on. It was ice cold.

He retrieved insulated gloves and carefully poured the excess liquid into the sink. He swore he saw it briefly turn blood red before slipping down the drain, but couldn’t be sure. He looked around to someone, anyone to tell him he wasn’t crazy. But he was alone, and there was still work to be done. He trudged forward with secondary blotting and the strange phenomenon quickly faded from his mind.

While he waited for the data, he reviewed his sequence files, anticipating primer failure. For the first time he noticed its genetic position… Chr 6, position +6.66 cM. Superstitions crept into Zahn’s mind, but he quickly forced them down.

After an hour, it was time to get back to work. He prepped his western for developing and took it and the DNA gel to the lab’s all-in-one imager. While imaging the DNA gel, the UV lights in the box struggled and flickered giving him only brief flashes of dozens of different sized bands, looking like nonsense at first, but as he caught more and more glimpses a final image appeared. The bands on the gel were oriented to send him a message, clear as day: 6 6 6.

The UV light died entirely within the machine and Zahn frantically retrieved the handheld light only to find that no bands appeared at all. He felt he was losing his mind but he charged forward collecting his data.

He switched the machine over to fluorescent imaging and collected a one second exposure. Blank, white, nothing. He raised the settings up to a ten second exposure. Black, smeared, overexposed. Little by little he adjusted the exposure time, second by second, revealing with further and further clarity that his western blot would not be defined by the proteins run on a gel but by a sinister power. He froze as the image of the devil’s face stared back at him on the computer and a smile crept onto its face.

The lights flickered and the computer crashed as thunder boomed outside. A siren wailed in the cell culture room and he ran to it. His induction samples were in the incubator that flashed with a high temperature warning. He swung open the door and a bubbling mass of flesh and pus oozed out and onto the floor expanding and hissing as it filled the room.

Zahn fled and slammed the door behind him but the ooze worked under the gap and pursued him. Glassware shook and pipettes whizzed past his head, as the force tried to prevent him from escaping with its secrets. He made it out the lab and ran down the hall. His only path to escape followed a trail of bloody paw prints. His destiny awaited him at the door. He slid to a halt with the ooze still on his heels. A grotesque rabbit flipped its ears and turned to face him. Its eyes burned red and blood dripped from its jaw. Zahn dropped to his knees as the monsters converged on him, clutching a notebook close to his chest.

Wow. So there you have it. Let us know what you think in the comments! In case you need it, here’s something to brighten your mood. 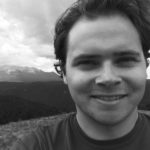 Lab manager at Magee-Womens Research Institute in Pittsburgh. My research focuses on several DNA repair genes in C. elegans. I recently self-published my first novel, LUCA, about the quest for artificial life.

View all contributions by Logan Russell